What comes first – Ambience or IT?

The five million dirhams question when you are opening a restaurant. 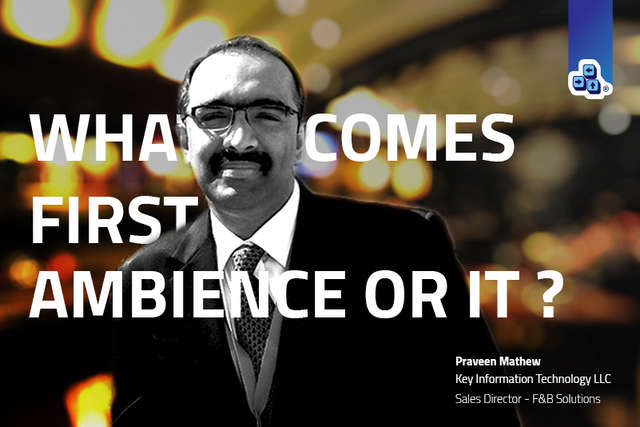 Ever been to one of those restaurants where they have an outdoor seating on tires instead of chairs and they serve steak on a metallic plate and have cutlery shaped like hardware tools and serve you drinks which have smoke coming out of it? Themed tissues and toilet papers, dark lights and fancy menus – even waiters who are dressed like garage mechanics on roller blades!

Themed restaurants are now opening up left and right – it seems to be the trend of the decade! I mean, if I woke up one morning, and won five million dirhams, the first thing I’d want to do is start up a fancy restaurant of my very own. I would travel the world, pick out the best of ingredients, hire chefs that cook like my grandmother and give them the best kitchen to work in. The next step would be to pick the hottest location in town and setup a classic ambience – whatever that takes: themed interiors, wacky furniture, fancy cutlery. Six months down the line, my 5 million turns to 15! Sounds easy enough, right?

When my colleague Praveen Mathew heard me daydreaming about this scenario, he begged to differ. Having been in the IT industry for over 13 years, Praveen, the Sales Director of F&B Solutions, believes that IT is the ultimate key to not only setting up a successful restaurant but also ensuring that it runs smoothly. He’s here today to share his experience and that of many F&B entrepreneurs some of which he’s helped transition into a successful company through a consultative approach. And so the conversation began.

Restaurants usually focus on the food they serve and the ambience they set up. But you say that no restaurant can run quite so smoothly without the presence of IT. What is it about IT that makes it so integral to the operations of a restaurant?

Designing the concept, engineering the Menu and selecting kitchen amenities often takes precedence over the IT requirements. While acquiring the right location and setting up a welcoming ambience are both very important to the restaurant, it cannot be prioritized over the need to hire the right people who know how to work with a suitable IT infrastructure.

The kind of location you are going to choose, the investment you will make, the staff you will hire and the capital flow you are expecting to come into - is all that will sustain you over the initial stages. But in the midst of all this, the importance of putting more investment into a proper IT solution is forgotten. And therefore the core analytical force that drives business efficiency and insight is lost.

We have come a long way from a manual way of managing a restaurant – everyone knows that. In today’s tech-savvy world, how is it so that IT is still overlooked?

IT isn’t overlooked – it’s the importance of a correct solution that is overlooked. Every restaurant has different needs. And IT is growing, it’s no longer about simply punching in an order, sending it to the kitchen and submitting the bill to the customer.

I would say, five times out of ten, we are contacted when the restaurant is probably 70 to 80% ready. Which makes a lot of difference. Because that is the time the owner or the investor has already put in a lot of investment into the front end and is unable to meet any more financial needs for the back end of the F&B operation.

The general outlook is that IT is not important, and that just any POS system will do as they simply need to run it and generate simple reports. But I can tell you, from experience, this decision should involve more complex factors than just generating simple reports or punching in orders. It is true that for the most part - POS systems have the same architecture. However there is a secret ingredient to it which is why people come back to us after they feel that the support around the solution does not fulfil their cravings.

But on the other hand, there are also circumstances where the entrepreneurs understand the need of going with the IT solutions which is most beneficial in the long run. They always put their effort into get the best system because they understand the effect technological evolution has over the need for a chic ambience.

We have built relationships with many incredible visionaries like this who are now very satisfied with their restaurants - ranging from the highest fine dining restaurants to a street-side restaurant using just one workstation. Because once they have invested in suitable Hospitality solutions - after careful consideration and pairing with experts who provide a stable and long term relationship that supports their growth - then they can be certain that it will stay with them and help them grow.

But typically, scaling is a part of any business right? You start small then grow big. Every business intends to grow. So shouldn’t it be natural to want to scale up as and when a need for it arises?

Scaling IT infrastructure isn’t as easy as changing a restaurant design. The importance of IT ends up taking a back seat. The realization of its importance only comes once the restaurant reaches operational barriers. When you want certain reports coming in, when you want to see the data, when you want to install certain add-on modules or third-party applications – in short when you are not able to move the operations in a flow that you expect it would.

This is when it becomes an eye opener. But by then it becomes too late, since the system is already up and running and will end up doing only a little for their now-realized needs. This happens because of a lack of accurate functionalities and reliable support platforms that the restaurant needed in the first place. It’s always a tough scenario and needs to change.

What people really need to understand is that this ultimately ends up being expensive. Simply because scaling is an option, doesn’t mean it should be practiced as the go-to choice when it should be seen as a prioritized factor in the entire process.

So what you are essential saying is that ‘Cheap is expensive and expensive is not cheap’?

Exactly! Scaling might just ultimately result in double expenditure on the IT infrastructure compared to investing on it in the first place. A lot of factors go into defining why this would be more expensive. The systems need to be changed or upgraded during the middle of a business life cycle. You also have to factor in the time a company loses in retraining their staff to familiarize themselves with the new systems.

Both these things result in the business either slowing down or going on a hold for a relative period of time, and thereby greatly affecting productivity. You could actually say that if IT wasn’t given less importance compared to other factors in the beginning itself, then the initial investment might have given them a greater ROI within the first year.

Do you think that things would be different if IT is one of the first aspect one looks into when budgeting a startup?

F&B industry always gives more importance to the interior designing, concept designing, menu engineering, staff and kitchen. More focus is given to the design, look and feel of the establishment. Owners always say that customers come not to see the system – which is true. They don’t visibly see a POS system or a backend system that is running there, what they see is how the concept is built, the atmosphere, the food and the service. These are the customer-facing factors that they would rather invest on.

But in order for the dynamics of customer-facing factors to have a smooth workflow, it is imperative to have a strong IT infrastructure behind the scenes. This may be something that the investors may take lightly. Yes, the customer may not see its presence but they will definitely sense the work done by it. The driving force that puts everything together and brings about a smooth and successful operation is definitely the IT.

The world is changing, IT is now the backbone of every industry. I mean, just imagine losing your mobile data for 2 hours. How much would that disrupt your business operations for the day? As we move forward into the future, technology becomes a more integral part of our life – take Wearable Technology  for example and that’s just the tip of the iceberg.

Your operations cannot survive without a proper IT infrastructure in place that is supported by the right people.  I cannot stress the importance of having a seamless connection between people and technology.

It seems that IT certainly does deserve to be on that top spot along with Concept Design and Food Menu. Especially if you aim to make the best of your budget and ensure that you are investing in the most efficient and reliable POS technology. Praveen believes that it is his responsibility as a representative of KIT to have a consultative approach towards the importance of having a proper IT infrastructure in place. From his experience, he believes that putting your IT first has always proven itself to be a fair and wise decision in the long run.

If you thought that was interesting, then you’ll certainly find these a good read too.

After 12 years of using OPERA, the brand’s latest property is no exception.

PCaaS got your head scratching? We have the answers.

Who defines the line between Robot and Human?

Yes, I found this useful!

Hmm, it was okay!

No, it wasn't useful!